On July 1, 2018, Hewitt became the Minister of Worship, Congregational Care and Leadership.  This is after a short stint as Minister of Learning and Growing in Faith.  He was trained in Jamaica where he graduated from United Theological College and the University of the West Indies.  After graduation, he served 4 years in congregational life and two years at the International University of the Caribbean before immigrating to Canada.  His first Canadian congregational work began in February 2013 in Dryden, Ontario.  He was admitted to the UCC as an Ordered Minister in May 2015.  Before coming to Collier, he served in Thunder Bay.  He has a love for God and God’s children/people and a passion for love and justice in the world.

Rev. Dr. Donald Jay has been part of the ministry team since 1998.  For many years Don worked part- time providing Pastoral Care to our seniors and shut-ins.  He is now retired from active pastoral work but still an important part of the life of our congregation. 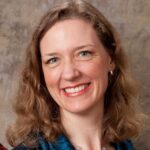 Sandra Lisa Ruttan
Music Director
Sandra Lisa Ruttan grew up in Sarnia, Ontario and has degrees in Music and Education from Western University and, more recently, a degree in Indigenous Social Work from Laurentian University.   She brings those three interests together as a performer, teacher, and advocate for social justice, mental health and spiritual well-being.  She is a long-time employee of the Simcoe County District School Board, as well as a private music teacher, and has had the privilege of making much music with others through performances with fellow musicians, notably the Huronia Symphony Orchestra, the Apollo Orchestra, the Amity Piano Trio (in the Colours of Music festival), the New Tecumseth Singers,  Opera Barrie and individual artists.  She is passionate about all things musical and especially about music for children.  She founded the children’s music program “Rhythm & Pitch” at Grace United Church, where she was also Music Director, before assuming the position at Collier United in July 2020.  Previous to her position at Grace United, she served as Music Director at St. Margaret’s Anglican Church in Barrie.